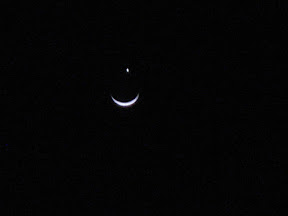 This event was particularly witnessed by the Asean Nations and as far as India. The view here in the Philippines was great and memorable that even non-astronomers – who for the most part takes the evening sky for granted – were looking up in the sky and taking pictures of the Moon and Venus before and after the occultation.

If I will take Sherlene’s reaction as one of the possible reason why people are looking up in the sky, it was because the Moon and the Planet Venus looks like the Islamic Crescent Moon and Star. I agree, it does look like one! Particularly the flag of the Islamic Republic of Mauritania, a North African Nation!

Flag of the Islamic Republic of Mauritania 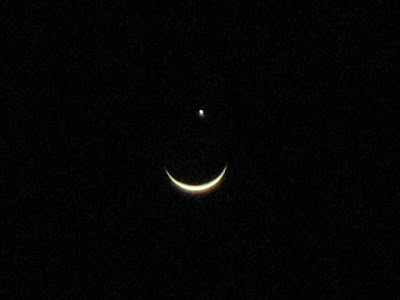 Venus occultation by the Moon

It was an experience to remember for all the Filipinos and Aseans who witnessed the event. Most of us takes the sky for granted, if you ask your friend to spot any planet, more likely than not they can not tell the difference between a star and a planet!

A special mention and congratulations goes to the Astrocamp Observatory at San Miguel By The Bay, Pasay City for introducing the Filipinos to astronomy. They’ve been there for one year already and yesterday’s event was the first time I saw their observatory jam-packed not because of a popular astronomical event like solar eclipses rather because of an event that is usually only observed by astronomers. 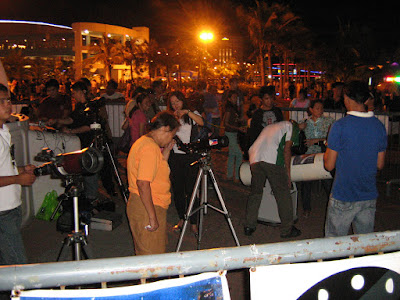 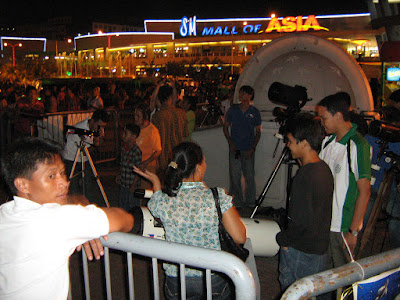 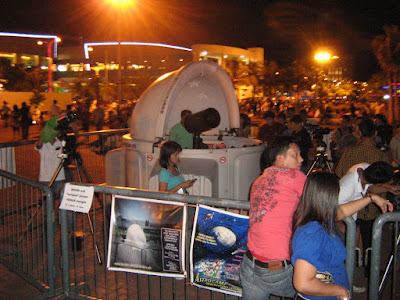 You should visit them. If you use Stellarium or Celestia or any other astronomy application to view the sky, you are still missing a lot. The experience, the feeling, the closeness of seeing these objects up in the sky directly (with the help of telescopes of course) instead of photos and applications is far different. As far as the distance between Earth and the M31 Andromeda Galaxy, which is currently at 2.5 million lightyears.

Trivia:
Did you know that the word “Moon” is actually the name of Earth’s natural satellite? In 1665, it was extended to refer to the recently discovered natural satellites of other planets. However, to avoid confusion, all these objects were given distinct names. But non-astromers to this day still say, for example: “Phobos and Deimos are the two moons of Mars”. The correct is: “Phobos and Deimos are the two (natural) satellites of Mars”.

Because the “extended” meaning hasn’t gone out of usage, “Moon” with a capital “M” refers exclusively to Earth’s satellite, while “moon(s)” with a small letter “m” refers to a planet’s “natural satellite(s)”. And “Luna” is the Latin name, used commonly in fiction.

Donations for the magus

Is a bibliophile and technophile other than being an early adopter, an avid gamer, anime otaku, trekker, and photographer. He is an advocate of “Free Culture”, “Open Knowledge”, “Creative Commons”, “Free/Libre Open-Source Software”, and the “Fediverse” (federated social-network).

His first online project was in 1998 when he launched the unofficial website for Ansalon MUD (a text-based online game) and his own community forums Laibcoms.Community. Today, he owns a variety of online properties and help others establish their online presence.

Confirm his identity through Keybase, and learn more by reading his central bio. Yuki’s hubsite, Tomes of Knowledge, is located at jcsesecuneta.com.

Venus Occultation by the Moon by ᜌᜓᜃᜒ (Yuki|雪亮) is licensed under a Creative Commons Attribution-ShareAlike 4.0 International License. Permissions beyond the scope of this license may be available at Legal Notice.

This site uses Akismet to reduce spam. Learn how your comment data is processed.

Add techmagus™ 📡 to your Homescreen!

Yesterday, May 16, 2010, the only astronomical event this year involving a major planet was witnessed by everyone in the Philippines - the occultation of …

Skip to toolbar
techmagus.icu uses Cookies to provide you with the best experience. If you opt-in, you agree with its use & our Privacy Policy.I AgreeI refusePrivacy policy